The 2019 PINE Conference 'The Purpose of the Economy' taking place on the 14th and 15th June was a great success. PINE was delighted to welcome international experts and a curious crowd of many students.

Can you imagine your economics professors or politicians questioning the value of economic growth? Reconsider the dominant theories of banking? Philosophize about the fundamental values we perpetuate with our economic activity? No? Well, that’s what we did at this year’s PINE Conference ‘The Purpose of the Economy’. We called into question the very basis of the economic conduct: What is its purpose, what do we do it for? Should we amend the purpose we are currently following?

At our conference, the around 100 attendees got the chance to come together with fellow students, friends and experts to tackle these and more issues from a pluralistic perspective. 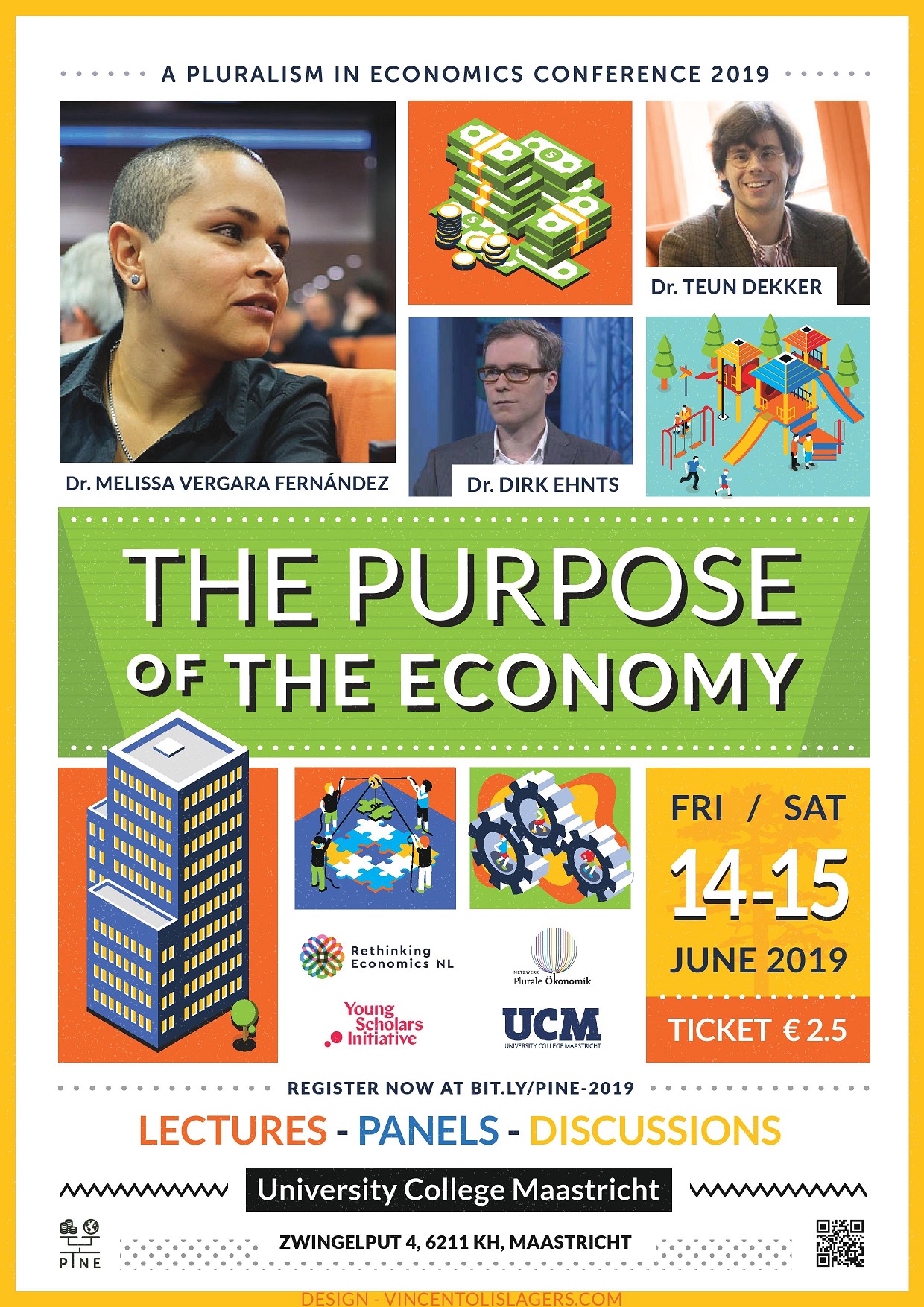 The PINE Conference tackles the question of which purpose the economy serves and which purpose an economy should ideally serve in today’s societies. You can choose from five tracks:

Learn more about the speakers and trackers of the 2019 conference by scrolling down:

The Pluralism in Economics Conference is an annual two-day event organised by the student initiative Pluralism in Economics (PINE) at the University College Maastricht (UCM). With its conferences, PINE wants to offer a platform for discussing the role of pluralism in economics to understand complex socio-economic issues in today’s societies as well as the broader value of pluralist economics education at university-level. Given that the University College Maastricht is located right at the centre of Europe, it provides an ideal location for bringing together motivated students from across Europe who are passionate about pluralist economics education.

In the past years, our conferences have been successful in all imaginable respects and received positive feedback from participants, speakers, track and workshop facilitators, the university, partner organisations and the PINE-team itself. We hosted around a hundred enthusiastic and interested people, who joined us from all around the Netherlands and its surrounding countries to converse under headings such as ‘Capitalism & Democracy’ or ‘Capitalism & Inequality’. The setting, in this as in all previous years, is the building of University College Maastricht, a refurbished old monastery full of character and allure. As we understand it, the conference’s atmosphere is just as important as its content. Accordingly, in order to stimulate a relaxed and fruitful sense of vision and constructive debate, we supplement the scene with fringe events and decorations. Imagine a bright and colourful arrangement including a ‘Market of Inspiration’, a ‘Playground of Ideas’, multiple interaction possibilities, art installations, performances of the faculty’s circus committee, live music and of course an assortment of vegan and vegetarian foods and drinks.

This year’s Pluralism in Economics Conference revolves around the question which purpose the economy serves and which purpose an economy should ideally serve in today’s societies. Traditionally, neoclassical theory defines the discipline of economics as the study of human behaviour under conditions of scarce resources with alternative uses to reach desired ends. While this definition sketches a broad frame of how human actors and material goods relate to each other, it does not take into account the more fundamental question which social ends ought to constitute the basis of an economy. Accordingly, we want to raise the fundamental question: Which purpose should an economy in today’s societies serve?

In order to find answers to this question, participants will be granted the opportunity to choose between five different tracks ranging from the relationship between the state and economy to the role of democracy, distributive justice, growth and happiness within today’s economies. More specifically, guiding questions in defining the purpose of the economy will be: What could be the role of the state in a modern economy? Market vs. Democracy: who should decide on what? Which value does our economy create and how is it distributed? Does economic growth serve the purpose of the economy? And which role does the happiness of citizens play in conceptualising the purpose of the economy?

Answering these questions demands interdisciplinary investigation which the PINE Conference 2019 will contribute to. Aligning with the idea of Pluralism in Economics, we will offer a platform for discussing the purpose that economies should serve in today’s societies from the perspectives of various disciplines, among them different branches of economic thought, politics, sociology and political philosophy. Together with experts and motivated students from various backgrounds, we will conceptualise the purpose of modern economies on theoretical grounds and connect our findings to contemporary case studies such as growing populist tendencies, political apathy, the role of financial crises and citizen’s happiness as well as income- and wealth disparities within today’s societies. Thus, our aim is to connect theory with praxis, experts with motivated students, work with leisure time and to act as a bridge among different disciplinary backgrounds.

In this spirit, the purpose of this year’s Pluralism in Economics Conference is to sketch new narratives and imaginaries for conceptualising an economic system that incorporates variables which are deemed to serve the purpose of an economy and which transcend the limited definition of economics in neoclassical theory. Do you want to be part of this endeavour? Then join the Pluralism in Economics Conference “The Purpose of the Economy” in summer 2019 at the University College Maastricht in the Netherlands!

What kind of Pluralism in Economics?

In this track we will explore the notion of pluralism in economics in some depth. We will look at different kinds of pluralism or dimensions in which it can be achieved. Then we will consider whether these kinds are all equally beneficial and, if so, to what extent. We will focus on the role of pluralism in economics with respect to two aspects: economics as a scientific discipline and decision-making in policy contexts. The track facilitator will be Dr. Melissa Vergara Fernández.

Freedom, Efficiency and Justice in the Market

Freedom, Efficiency and Justice are three appealing values we might want our economic system to realise. However, it is not clear what it means to do so, and if they can all be realised at the same time. In this track we will consider how we might operationalise these three values and explore what trade-offs there are between them, as well as how they might be reconciled. The track facilitator will be Prof. Teun Dekker.

What Could be the Role of the State in a Modern Economy?

Thinking about the role of the state has until recently been an exercise in demonizing the state and politics in general. Welfare states have been under attack, liberties of individuals were highlighted and led to identity politics, lobbies and think tanks use their (intellectual) power to influence and shift public debate as well as public opinion. The corporate world is full of scandals, both in the real world – think about diesel engines – or in the financial world, where national governments were targeted by criminals that took billions from them. Global warming is not addressed by national government in any satisfying way, inequality of incomes and wealth is at maximum levels – it seems that the role of the State must be reinvented if current issues of today must be addressed effectively and without much delay. We will discuss what the State can do in policy fields like the Green New Deal, distribution policy, industrial policy, the Job Guarantee and financial market regulation. The track facilitator is Dr. Dirk Ehnts.

The Purpose of the Economy - Growth?

In this track we will focus on the role of economic growth and its entanglements with the purpose(s) of the economy. We trace how economic growth is argued to fulfil certain proclaimed purposes of the economy (such as stability, employment, or well-being), and subsequently investigate why certain scholars – especially ecological economists – demand a move away from economic growth, either meaning a move away from GDP as a welfare indicator, or referring to a radical move away from capitalist modes of production and consumption. We discuss a range of different variants of degrowth and post-growth positions, as well as critiques thereof. In the second half of the workshop we take a closer look at consequences of rejecting economic growth as a measure of societal welfare, and investigate how different models of welfare, which move away from environmentally harmful consumer welfare, might look like. The track facilitator will be Birte Strunk.

Money does not buy happiness, as the saying goes, although many people do not agree. Most people want to own a big house, luxury sports car and lottery. In this track, I will discuss what we know from happiness economics about the relationship between economic growth, income and happiness. Does our wealth explain why the Netherlands is one of the happiest countries in the world? Are rich people happier than poor people? Does economic growth boost happiness and under which conditions?

The track is organized as follows:

The track will be hosted by Dr. Martijn Burger.